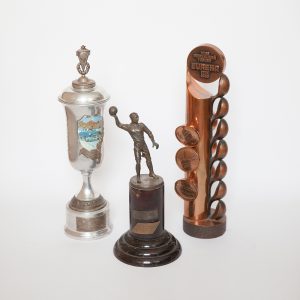 Awards for sports and scientific achievements of Kaunas Polytechnic Institute, 1956–1981

A big part of the Museum’s exhibits consists of various awards certifying the University’s achievements in science, as well as in sports. KPI scientists won the transitional award “Eureka” awarded by the USSR Council of Inventors and Rationalisators in 1977, 1978, 1979, 1980 and 1981. Team Cup of Winter Rally was won by KPI sports club “Politechnika” in 1979, 1980 and 1981. Among these awards, there is a gift to the winners of the basketball match 1956-1958 from KPI Spartakiad.