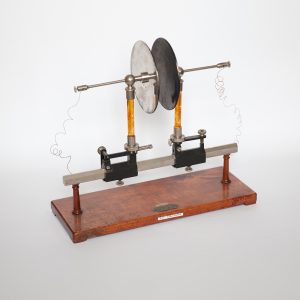 Device used at the workshops of the lectures of physics at Vytautas Magnus University, 1930-1940

After a fairly difficult and poor beginning, during the second decade of Lithuania’s independence the University already had a fairly modern and developed base for preparation of the engineers, including studies, laboratories required for research work, buildings and equipment. It was a clear testimony of the state’s opinion on and attention to the higher education. Max Kohl A. G. – a company established in 1876 – one of the most famous producers of scientific instruments on the early 20th century.