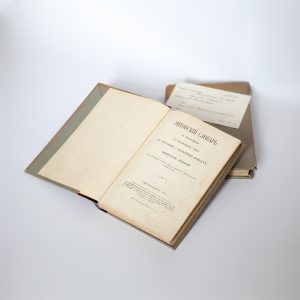 Dictionary of the Lithuanian language, prepared by Antanas Juška, first published in Saint Petersburg in 1897, property of Prof. Antanas Purėnas

During the period of the Czarist oppression, when it was prohibited to use the Lithuanian characters in press, priest, ethnographer and collector of folklore A. Juška was collecting Lithuanian folk songs, words of spoken language, described customs and published his collected ethnographic material. The dictionary containing Lithuanian words of spoken language and their translation into the Russian and Polish languages was published during the complicated period for the Lithuanian language; it soon became a rare bibliographic valuable. It is the oldest exhibit of the Museum.